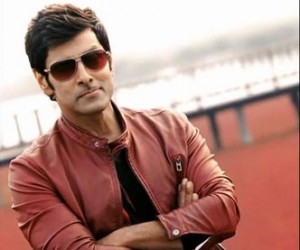 Vikram is an Indian film actor. He made his debut in the 1990 film En Kadhal Kanmanii which was followed by a series of Tamil and Telugu films and supporting roles in few Malayalam films throughout the early decade. After the critical and commercial success of Sethu (1999) he became part of numerous other commercial hits and has earned major critical acclaim for many of his performances.

Vikram is someone who gets right into the skin of the character. He is one actor who can pull off any roles with ease. He has showcases variety of characters that was portrayed on screen with great success. Thus he got a huge fan base in most of the south Indian states. His work was also appreciated in Bollywood too. He has been in the show business for a whopping 25 years and married his only lady love; he met her during his days at college.

He began his career with a debut in 1990 Tamil film of which was followed by a series of small-budget Tamil, Malayalam and Telugu films, many of which went unnoticed. But the success of Bala’s tragedy film in 1999 gave Vikram a successful career as an actor. Later in the 2000s he appeared in a series of masala films becoming commercially hit ventures.

His dad was an actor who had aspired to be in the lead roles but found home playing smaller roles in film. His dad’s long lasting dream came true when Vikram became a successful actor. In 2003 Vikram’s performance as a gravedigger with autism disorders in Pithamagan saw him great performance which won awards for best actor National level of film award. During his years in the Indian film industry, he has won five filmfare awards as well as one National Film Award for Best Actor.

Vikram was born as Kennedy John Victor to a Christian father Vinod Raj and Hindu mother Rajeshwari. Vikram went to graduate in English literature from Loyola College and was halfway through MBA when he met his lady love – Shailaja Balakrishnan. They got married and are blessed with two kids.

During the acting period, Vikram appeared in diverse roles and received critical acclaim for his performances for which he charges high fees. He consequently appeared in multiple get-ups as a bodybuilder and a crippled hunchback, losing up to 35 kilograms for sequences and won rave reviews from critics for his performance. It is currently the fourth highest-grossing Tamil actor of all time.

Vikram went to graduate in English literature from Loyola College and was halfway through his MBA when he met with a major road accident. He was bedridden for three years and he used crutches for walking for a long time. It was during this testing phase of life that he found his lady-love.

Vikram is an Indian film actor. He made his debut in the 1990 film En Kadhal Kanmanii which was followed by a series of Tamil and Telugu films and supporting roles in few Malayalam...