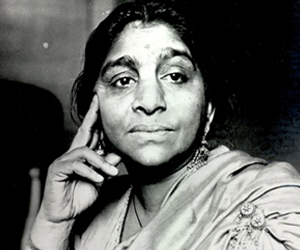 Sarojini Naidu, often titled as ‘Nightingale of India’ had been one of most famous poetess of the country, a distinguished freedom fighter and an amazing orator of the era to which she belonged. She was born on the 13th of February, 1879 and had been an ‘Aquarian’ by virtue of her date of birth

Planets like Uranus and Venus have acted upon the natal chart of Sarojin Naidu all the time giving her certain specific personality traits and attributes that made her stand out from the crowd. Under these planetary influences, she had been a very determined individual with a sound sense of balance in whatever she did. Her personality had a charming edge to it and exuded strength all the time.

Sarojini was born to Aghoranath Chattopadhya and Barada Sundari Devi and was the first of 8 siblings she had. Her brilliance showed itself right from the childhood years. She inherited the poetic talent in legacy from her mother who too was a poetess. Her father had been a philosopher and scientist by profession. Thus brilliance, name and fame were very much in her genes. After topping at the matriculation exam while she was 12yrs of age, she embarked on a journey to England for the purpose of higher studies. This journey was actually fostered by the scholarship she had received from the Nizam of Hyderabad for her poetic talents. She got wedded to Dr Govindarajulu Naidu while she was 19 years of age and became Sarojini Naidu from Sarojini Chattopadhya

Sarojini Naidu’s achievements are endless. She had been the first woman president of the country’s Indian National Congress Party and also the first woman governor of an Indian state. As a poetess, revolutionary freedom fighter too she attained great name, fame and many accolades.

Sarojini Naidu’s contributions to the Indian freedom movement and to the Indian literature are known to all. She played a major role in making the Indian women of her times, aware of their rights. She did much to instill confidence and self-esteem in the minds of Indian women who since time immemorial had been cornered and trampled by Indian patriarchy..

Sarojini Naidu, often titled as ‘Nightingale of India’ had been one of most famous poetess of the country, a distinguished freedom fighter and an amazing orator of the ...