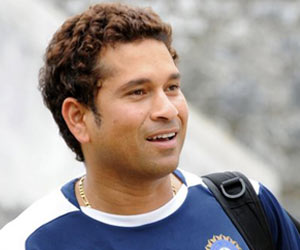 Sachin Tendulkar has been the most complete batsman of his time, the most prolific run maker of all time, and arguably the biggest cricket icon the game has ever known. His batting was based on the purest principles: perfect balance, economy of movement, precision in stroke-making, and that intangible quality given only to geniuses - anticipation.

He is as solid as a rock, and some may even say he is the most dependable, making an excellent employee or friend. Loyal and loving, who is not so fond of change, especially when he is happy about his routines set? He prefers a comfortable life. Change is perhaps what he needs to embrace the most. He has immense perseverance. He might not always lead the way but build on what is already there and have the patience to see a project through to the end.

Sachin Ramesh Tendulkar also nick named as the Little Master is a former Indian Cricketer and captain widely regarded for his great batsmen-ship. He took up cricket at the age of eleven. He debut against Pakistan match at the age of sixteen. He has ever since then represented India domestically and internationally for twenty-four long years.

In 2002, just halfway through his career, he was ranked second by Wisden Cricketers’ Almanack as the greatest Test batsman and ODI batsman of all time. He was a major contributor and a part of the World Cup when India won the team in 2011. H was received with Arjuna Award in 1994 for his outstanding supporting achievement. Which led to many more awards and honours in the preceding years that followed. In December 2012 he announced his retirements from ODIs, later retired from Twenty20 cricket in October 2013.

On May 24th, 1995 at the age of 22, Tendulkar married Anjali a paediatrician and daughter of a Gujarati Industrialist Anand Mehta and British social worker Annabel Mehta. Anjali is six years his senior. They had a courtship of five years and got engaged in 1994in New Zealand. They have two children, Sara and Arjun.

Sachin Ramesh Tendulkar, often referred to as the ‘God of cricket’ in India, retired from all forms of international cricket on 16th November 2013 after playing almost 24 years at the international stage. He’s been handsomely compensated for his efforts too. Tendulkar’s curent net worth is estimated to be a whopping US$115 million, which is far and away the highest among all cricketers. This is made up of both prize money and endorsement earnings. Sachin Tendulkar launched his own sportswear and cricket equipment range in association with Australian sporting gear and equipment company Spartan Sports International

Sachin Tendulkar will find he is feeling a bit under the weather. It`s nothing major or very serious, but it has you feeling sluggish and a bit depressed. Just take it easy today and do something low-key that you enjoy in order to help yourself feel better. You`ll be back on your feet again soon

Sachin Tendulkar has been the most complete batsman of his time, the most prolific run maker of all time, and arguably the biggest cricket icon the game has ever known. His batting...