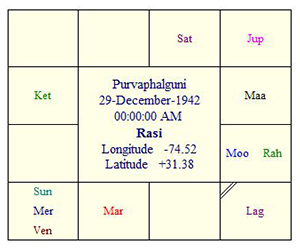 Rajesh Khanna often nicknamed as the Indian cinema ‘superstar’ had been a renowned actor of the Indian movie industry plus movie producer as well as politician. He was born on December 29th and was a Capricorn native by virtue of his date of birth

Celestial influences of Moon and Saturn had made Rajesh Khanna what he was as a person. Under these planetary influences he had been a quite thoughtful, dedicated and responsive individual in his lifetime

Rajesh Khanna was always drawn to creativity and aestheticism when it concerned his work. Artistic career pursuits overjoyed him and he always made sure to be a part of such career endeavors

Being sociable as a person he had a huge group of friends and had always wanted their company as he hated to be lonely and cut-off. In matters of romance he had been slow and had always taken time to commit

In money matters he had been mostly good except for a few dark phases here and there. Though good at handling money and in money management, he had always nurtured some unwanted insecurities and that led to him taking certain wrong financial decisions occasionally

In health matters, he had experienced both good and bad times. Whenever he became negligent about health, ailments took the opportunity to creep in. At other times; i.e. when he had been health conscious, he could actually steer clear of these ailments

Rajesh Khanna often nicknamed as the Indian cinema ‘superstar’ had been a renowned actor of the Indian movie industry plus movie producer as well as politician. He was ...