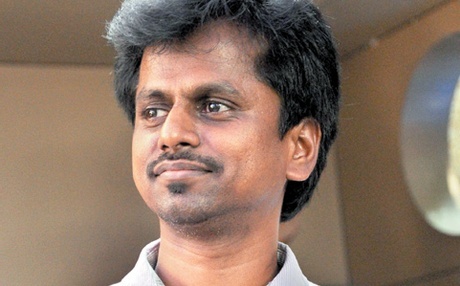 A. R. Murugadoss (born Murugadoss Arunasalam) is an Indian film director, producer and screenwriter.A. R. Murugadass was born in Kallakurichi, Tamil Nadu. He studied B.A. in Bishop Heber College, Trichy. In the College he had the great affinity towards Tamil films and friends. During his college days, he was active in cultural events, particularly in performing stage mimic shows imitating famous personalities of cine field. Murugadoss currently resides in Virugambakkam, Chennai. Right from his school days, Murugadoss has been inclined towards writing short stories and novels. Encouraged by people close to him, he moved from Kallakurichi to Chennai. He started his career by working with writer Kalaimani. Later he worked in the Tamil film Poochudava, acted in a cameo role and as an assistant director with S. J. Suryah for films like Vaali and Khushi. S. J. Suryah recommended to ajith for directing his first film, Dheena. It was a commercial mass entertainer and was a blockbuster. His next one Ramana starring Vijayakanth was a commercial success too and was one of the biggest hits of the year. His third film was Ghajini starring Surya and Asin. It was one of the biggest blockbusters and he gained recognition as a director. His fourth film was Stalin starring Chiranjeevi, which fared well at the box office. His fifth film was Ghajini which was the Hindi remake of Ghajini and released on 25 December 2008. It broke all records to become the highest grossing Bollywood film at the time of its release. Murugadoss's Tamil film 7aam Arivu, with Surya Sivakumar doing the lead role, pairing together for the second time, released on Diwali to mixed reviews and didn't do well at box office. Murugadoss signed a deal with Fox Star Studios which includes the studio to produce and internationally distribute two Tamil films every year.[3] The first production in association with Fox Star was Engeyum Eppodhum, starring Jai, Anjali and Ananya. He is now shooting his new venture with actor Vijay in Thuppakki.This is first time where Murugadoss pair with Vijay in this action-adventure flick,where vijay pairing with Kajal Aggarwal.