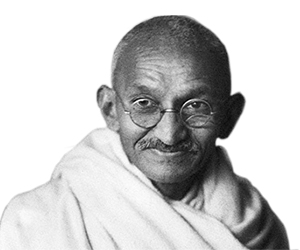 Mohandas Karamchand Gandhi fondly addressed as ‘Gandhi Ji’ and 'Bapu'. He was a
world famous freedom fighter and political figure during the Indian National Movement. Some of the
most notable revolutionary movements launched by Gandhi Ji were ‘Ahimsa andolan’ and ‘Satyagraha
movement’. Mahatma Gandhi is often differently referred to as the ‘Father of Nation’. Rabindranath
Tagore called Gandhi ji 'Mahatma'. He was born on 2nd of October and a Libran by virtue of his date of
birth.

Planets moon and Venus shaped the personality of MK Gandhi. Under these planetary influences, he had
turned out to be a very amiable and sociable individual with a very balanced and feasible approach
towards everything in life.

Beneath the calm exterior of MK Gandhi lied a sea of surging ambition and unflinching determination.
These attributes helped him move ahead on his path of career and allow many seemingly impossible
career goals to be fulfilled with ease.

Though he was lucky enough to have a steady income flow yet financial issues often wreaked havoc in
his life as MK Gandhi was not much concerned about wise use of money. He was not inclined to savingmoney.

Health of MK Gandhi was more or less sound except for the occasional emergence of certain illness. He
was health conscious but lacked the inclination and urgency to work towards improving his health to a
better state.

Mohandas Karamchand Gandhi fondly addressed as ‘Gandhi Ji’ and 'Bapu'. He was a world famous freedom fighter and political figure during the Indian Nation...