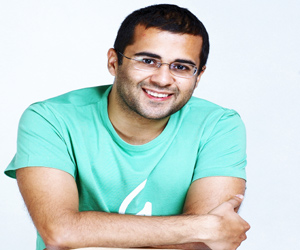 Chetan Bhagat is a renowned author, screenwriter, motivational speaker, columnist, TV Personality very dear to the heart of the young Indians. His novels in English focusing on young middle class of the urban Indian society have been widely accepted by the modern Indian young generation, bringing Bhagat to total limelight. He was born on April 22nd and is a Taurean by virtue of his date of birth.

Planets Venus and Uranus cast their major influence upon the natal chart of chetan bhagat, thereby making him what he is as a person. Under these planetary influences he comes to have an intellectual bent of mind and is carefree by nature.

He is a determined person who has all the capabilities to chase his career goals or dreams with utmost passion. Thus, he is empowered from within to make the most

Chetan Bhagat’s writing skills have made him a household name almost especially with the modern Indian young generation. He has penned down some of the most distinguished bestselling novels of the contemporary times. Some of the awards he has achieved so far include Zee cine award for best story, Filmfare award for best screenplay, CNN-IBN Indian of the year award etc

He tends to be over protective about his loved ones. When he is able to meet his soul mate there would probably be no one as caring, loving and trustworthy as he is. However, at times unwanted suspicion on his part may take a toll on his love life

He is not so very concerned about the valuables and assets he owns personally but he is lucky enough for the unparalleled money management skills he is gifted with. Thus, money is never much of an issue for him

He really needs to pay special heed to his eating habits and to his physical fitness. He tends to be a little neglectful in these matters and that may lead to a rapid decline of health for him. Taking a nutritious diet will see him through.

Chetan Bhagat is a renowned author, screenwriter, motivational speaker, columnist, TV Personality very dear to the heart of the young Indians. His novels in English focusing on you...